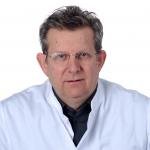 In 1980, after graduation as Medical Doctor from the Leopold-Franzens-University in Innsbruck, Austria, Roland Huf worked from 1980 - 1983 as a regular doctor at the regional hospital Schaerding/Upper Austria (training in general medicine). Since 1983 he has been working at the Surgical Clinic and Polyclinic of the Ludwig-Maximilians-Universitaet Muenchen. After Recognition as specialist for surgery he attained the subspecialisations “Intensive-Care” and “Emergency Medicine”.

During this period, he was the latest Senior physician of the Central Emergency Department (ZNA) at the University Hospital of Munich - Campus Grosshadern, to be restructured and as head of the surgical intermediate-care ward at the Grosshadern hospital of the University of Munich.

In 1990 Ronald Huf established the Air Rescue Centre (ITH) at the Grosshadern Clinic as the person in charge of the surgical clinic. In particular, he was responsible for medical and technical equipment. Since then he worked continuously and regularly at the ITH-helicopter service. In 2000, he graduated at University of Kaiserslautern, Germany with a degree in Health and Social Services Management. In 2006 he was Chief emergency physician at the opening match of the Football World Cup.

Ronald Huf is a member of the Executive Committee of the German Society for Disaster Medicine (Deutsche Gesellschaft für Katastrophenmedizin), member of the board of trustees of the Bayerische Arbeitsgemeinschaft für Qualitätssicherung in der stationären Versorgung (BAQ - Bavarian Working Group for Quality Assurance in Inpatient Care) as representative of the Bavarian Ministry of Science in the Bayerische Krankenhausgesellschaft (BKG) and from 1996 until 2018 he was member of the board of Association of Bavarian Emergency Doctors (with more than 3000 members). Meanwhile he's been appointed an honorary member.

Ronald Huf is an author of many scientific articles, editor of medical books and speaker at many medical training courses and congresses.